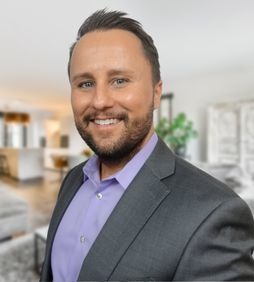 Ricky is blessed to co-lead one of the top-selling real estate groups in the country, Cain Realty Group (CRG).  He began his real estate career in 2006 and in 2009, he and his wife, KodiKay, co-founded CRG.  Ricky and KodiKay's passion for delivering a five-star customer service experience led to an abundance of referrals from clients and other Realtors from across the country, so starting the group happened quite organically.  They both realized that to deliver the five-star experience they were known for, they couldn't do it by themselves.  Since 2009, CRG has continued to grow annually in both clients served and in attracting exceptional team members that are in alignment with CRG's Core Values.

Giving back to those that are less fortunate has always been top of mind for Ricky and KodiKay.  Together, they have raised hundreds of thousands of dollars for KW Cares, as well as supporting many local organizations in the greater Austin area.  This passion for giving led them to create their own non-profit, Cain Cares.  Cain Cares was established to help CRG clients and their families get the support they need in a severe time of need.  This has inspired them to ensure they continue growing year over year to fund this mission that's near and ear to their hearts.

Coaching and teaching other agents and groups across the country is a passion of Ricky's.  So many have poured into him and have helped him over the years, and he considers it a privilege to do this for others.  Ricky was also a MAPS Mastery Coach for three years where he coached some of the top agents in the country.  He's also been fortunate to be a contributor to Gary Keller's Mastermind Group since 2015, which is an exclusive group of the country's top KW real estate agents.  Ricky also was blessed to be a contributing author to the inspirational book, Faith in Real Estate, which details the journeys and lessons learned of top Christian Real Estate Agents.

In Ricky's downtime, he enjoys spending time with his wife, son, and his dog, Chandler Bing.  He stays active by working out and running Town Lake, yet also enjoys relaxing by watching a great movie or lounging by the pool.  Many that know him know that his Rickaritas are legendary, and he's known for gifting them to those that send him a referral.  Lastly, Ricky has an extensive Monopoly collection that spans from the early 1900s to current editions.  He doesn't just work in real estate, he plays and collects real estate too.

Something Really Cool That Ricky Has Done
Geez.  Tough one.  So many things.  By cool, I think proud.  And I'm most proud of the lives we've changed from current and past team members and our own lives and the lives of our families from our persistence and our desire to always grow and think bigger

Ricky's Secret Talent
I can still flair with liquor bottles

Print out, color, and email your art to marketing@cainrealtygroup.com for your chance to win a $25 Amazon Gift Card! Read more
View All